The heated towel rail as a strategic & structural feature

The heated towel rail has an inherent flexibility which allows it to take on a number of different roles in the bathroom:  from enhancing the overall décor to being positioned as a breath-taking focal point, this chic accessory brings a unique essence of charm and elegance while having sufficient ‘oomph’ to make a dramatic statement – all on its own! 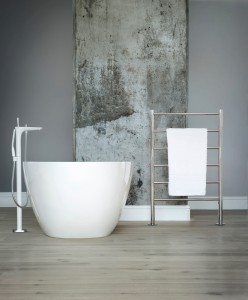 We take a look at using the heated towel rail as a strategic and structural feature of the bathroom space.

The heated towel as a parameter

The freestanding heated towel rail of the Jeeves Tangent X lends itself to a variety of design interpretations.  Graceful, with a definitive stylish appearance, this heated towel rail transforms the bathroom into an aesthetic wonderland to create a space of delicious indulgence. With an impressive height of 1000 mm and a width of 620 mm, this towel rail can easily hold three to four towels to add that extra pampering while bringing your individual stamp to the décor of the room.

Designed to be positioned strategically for maximum impact, courtesy of under-tile base plates which allow for a hidden installation within the floor, this streamlined design can act as an ideal dividing line in the bathroom such as between the standalone bath and the shower areas.  Enhancing the luxurious feel of the room, this trendy frame acts as a border without enclosing the area, facilitating the feel of continuity characteristic of modern open-plan living.

The heated towel rail as a study in form and function

Designed to create an innovative, striking effect, the Tangent W reinterprets the heated towel rail, presenting a contoured look which draws attention through a novel design combined with its compact effectiveness as a towel warmer.

Offering a practical swivel solution to provide access to the delights of a heated towel from different sides of the bathroom, this chic design can be used as a strategic feature, highlighting an area of the room while providing a structural function as a dividing line between bathroom sections.  However it is used, its presence adds a contemporary feel with a high aesthetic impact, bringing a distinctive look to the bathroom space.

The heated towel rail as a feature wall

Ushering in a sense of luxury, the Jeeves Quadro Eight boasts two groups of elegant round tubular rows set against a streamlined square frame.  This cutting-edge design, with its dramatic border, acts as a strategic feature, offering a mesmerising completion to the modern bathroom feature wall.

Drawing attention while bringing a sleek, design aesthetic to the room, the Quadro 8 can be used to deliver a singular feel to a minimalist space with the added advantage of the groups of symmetrical bars facilitating the pleasure of dry, warm towels as part of the Jeeves unparalleled bathroom experience.

The heated towel rail as a focal point

Commanding centre stage in any bathroom, the Ladder L remains one of the most sought- after designs in the Jeeves range.  With stylish tapering lines, this design has a magnetic sophistication, transforming the bathroom into an experience where indulgence meets aesthetic charm.

Sleek with a breath-taking simplicity, the Ladder L is an ideal strategic feature to bring an undeniable impact as a focal point of the room.

The structural charm of the heated towel rail

With its close proximity to the shower, this heated towel rail means you can literally step out of the shower and into the ready indulgence of a delightfully cosy towel to crown your bathroom experience.

While providing affordable luxury, the heated towel rail is synonymous with indulgence, playing a strategic role in bathroom décor with an added aesthetic flair as a strategic and/or structural feature, setting up the space as an oasis of sublime pampering.

Want to experience a heated towel rail in your bathroom?Contact Us
Contact Us
NEXT ARTICLE